All About The Top Designers Announced For NYFW

It’s almost here! IMG’s New York Fashion Week is back next month to showcase the newest trends and collections by designers from all around the world. As one a major fashion capital and part of the “Big 4” (along with London, Paris, and Milan), NYFW is one of the most well-known semi-annual events in the fashion industry. With IMG’s mission to inspire and showcase some of the best creations from local designers, NYFW is a vital time to showcase collections to the press and public, as well as unite key creators and communicators of the fashion industry. From Jeremy Scott to Rebecca Minkoff, this year’s roster of designers are impressive as ever. Here, we’ve compiled some of the top designers to look out for at NYFW 2019!

For over 30 years, American fashion designer Marc Jacobs has been pushing the boundaries in the fashion industry and has built himself a legacy like no other. Born in 1963, Jacobs studied at the world-renowned Parsons School of Design, where he started his career of success by receiving the CFDA’s Perry Ellis Award for New Fashion Talent, making him the youngest designer to win. Jacobs is known for defining “grunge” and making it a fashion trend in the 1990s by presenting the grunge collection to Perry Ellis in 1992. "I love to take things that are every day and make them into the most luxurious things in the world,” stated Jacobs.

Aside from launching his own fashion lines Marc Jacobs and Marc by Marc Jacobs, he was also the creative director of French design house Louis Vuitton from 1997 to 2014. During the course of his career, Jacobs has won numerous awards and continues to be praised by other influential figures including Anna Wintour and Sofia Coppola. "Marc seems to have lived more than the most, seen more than the most, survived more than most, and he somehow knows exactly what to appropriate, what to sample, where to draw inspiration from,” stated Wintour, who has been the editor-in-chief of Vogue since 1988. Marc Jacobs has successfully branded itself as taking a street-savvy approach to high-end fashion and has re-invented urban style along with the help of popular lifestyle campaigns that have featured celebrities including Jessica Lange, Cher, Kanye West, Miley Cyrus, and more. Never failing to impress on the runway, you can expect a dazzling show when Marc Jacobs features his newest collections at NYFW.

(Photo Via @MarcJacobs and @TheMarchJacobs)

If you’ve ever on the hunt for the perfect white gown for your big day, then you’re probably already familiar with designer Vera Wang. Known for turning a single bridal boutique into her own fashion empire, the native New York designer initially started out as a figure skater before transitioning to the fashion industry. Upon graduating from Sarah Lawrence College with a degree in art history, Wang was hired as an editor at Vogue, making her the youngest editor at the magazine. After 17 years, Wang decided to resign in 1987 to work at Ralph Lauren as a design director, where she stayed for 2 years before resigning at the age of 40 to start her own independent business. It was here where she opened up her first bridal boutique, Bridal House Ltd., on Madison Avenue in 1990; Wang then introduced her first ready-to-wear collection in 2000, and has since become one of the top high-end designers in the bridal industry.

Wang has designed many wedding gowns for well-known public figures such as Victoria Beckham, Sarah Michelle Gellar, Avril Lavigne, Hilary Duff, and more. She has also connected back with her figure skating roots by designing costumes for figure skaters including Nancy Kerrigan and Evan Lysacek. A true powerhouse entrepreneur, Wang has successfully pushed the boundaries of bridalwear through her new and contemporary ideas. “I take a lot of stylistic and visual and intellectual liberties with the concept of a wedding gown. Every season, I try to change it — and that demand I put on myself is enormous. It’s painful,” Wang told Business of Fashion. Years ago, many would have scoffed at the idea of the traditional wedding gown being anything but white/ivory, but Wang opened doors and brought in daring new colour palettes such as red and black. With her unique approach at luxury modern wedding gowns, Wang continues to take the bridal industry by storm and is sure to make a statement at NYFW. 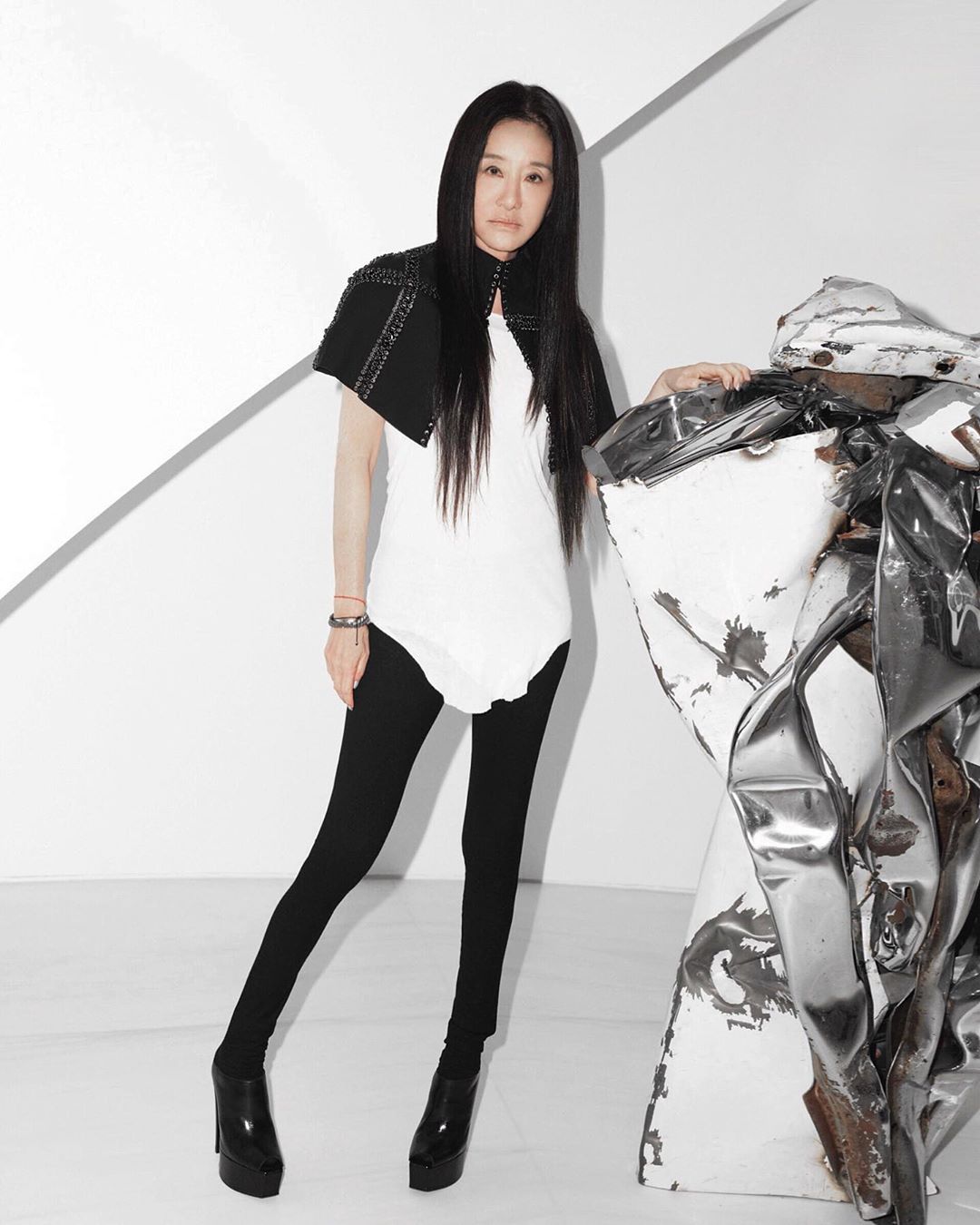 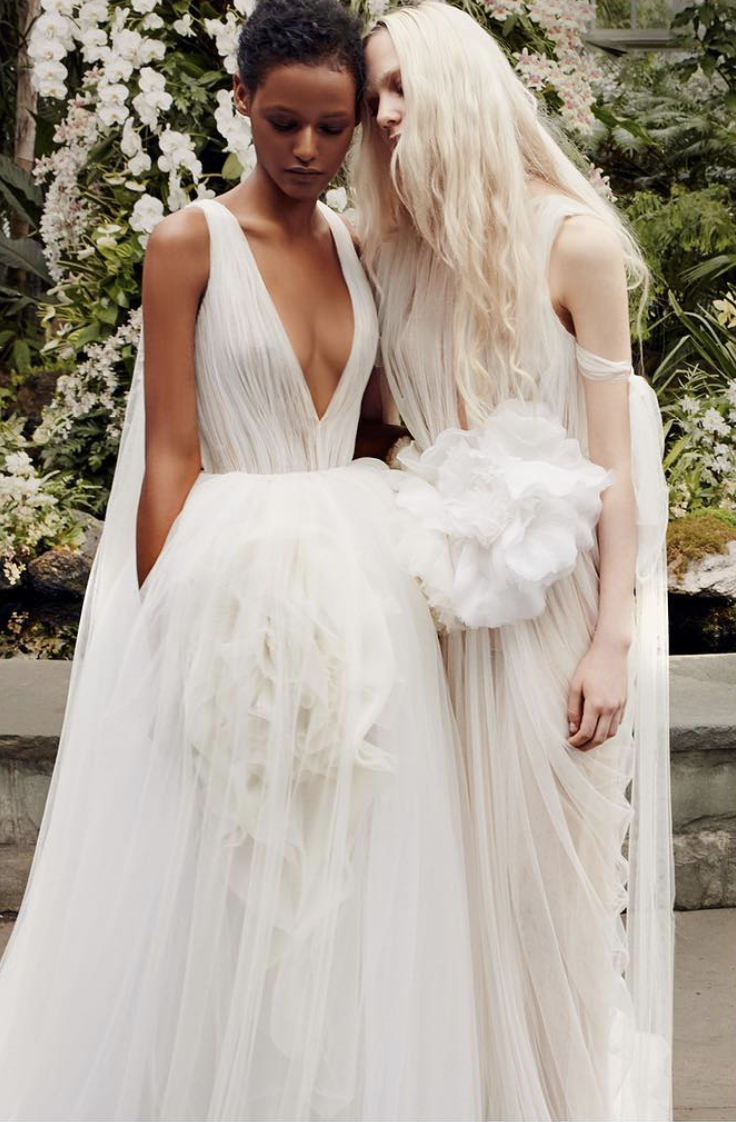 If you haven’t heard of designer Tomo Koizumi, then you’re definitely missing out! Based in Tokyo, 31-year-old Japanese designer Tomo Koizumi makes enchanting, colourful organza gowns that are a fairytale come true. The young designer developed an interest in fashion at the age of 14 when he discovered the work of John Galliano for Dior. While a major in arts, Koizumi was never trained in fashion design and instead began his early beginnings creating custom gowns for female friends. Working as a costume designer, Koizumi eventually began designing costumes for artists such as Lady Gaga and popular Japanese pop girl group Perfume and was also commissioned by Hong Kong actress and singer Miriam Yeung to create outfits for her world tour.

While Koizumi has remained quite lowkey it was only until recently that the designer decided to showcase his vibrant organza dresses to the public at New York Fashion Week in February 2019, after being discovered on Instagram by stylist and magazine editor Katie Grand. Becoming an overnight sensation, Koizumi’s hard work has definitely paid off and given him the recognition he deserves. With no employees and creating each gown on his own in his small apartment studio in Japan, Koizumi has accomplished something that many would not be able to do today on their own. For what’s to come, Koizumi has expressed that he has big plans. “I want my next collection to be even bigger – bigger dresses and more extravagant – because I think that the reason Katie invited me to do the show is that I’ve been following my dream and I want to keep doing that. And so, as the dream gets bigger, maybe even my dresses will get bigger,” said Koizumi. Be sure to keep an eye out for pops of colour on organza walking down the runway this year! 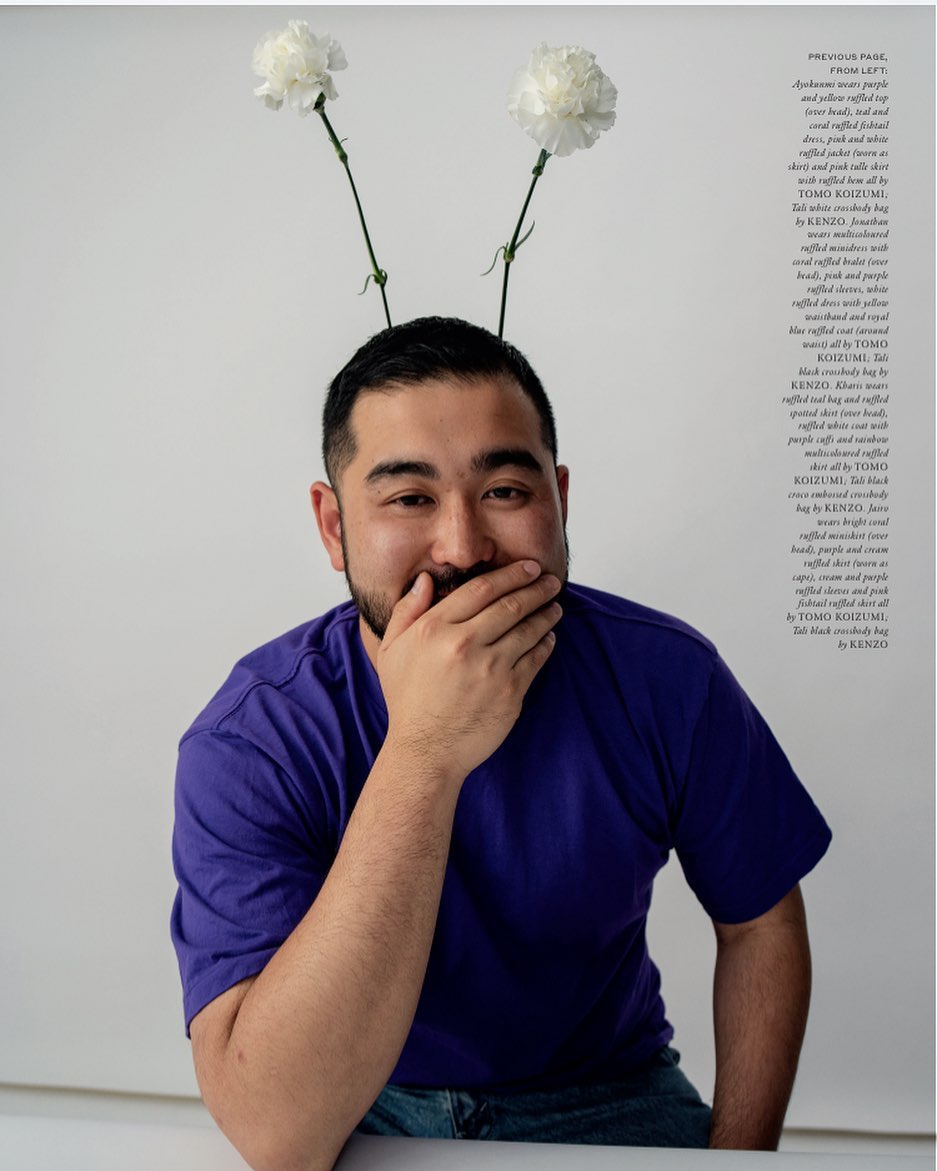 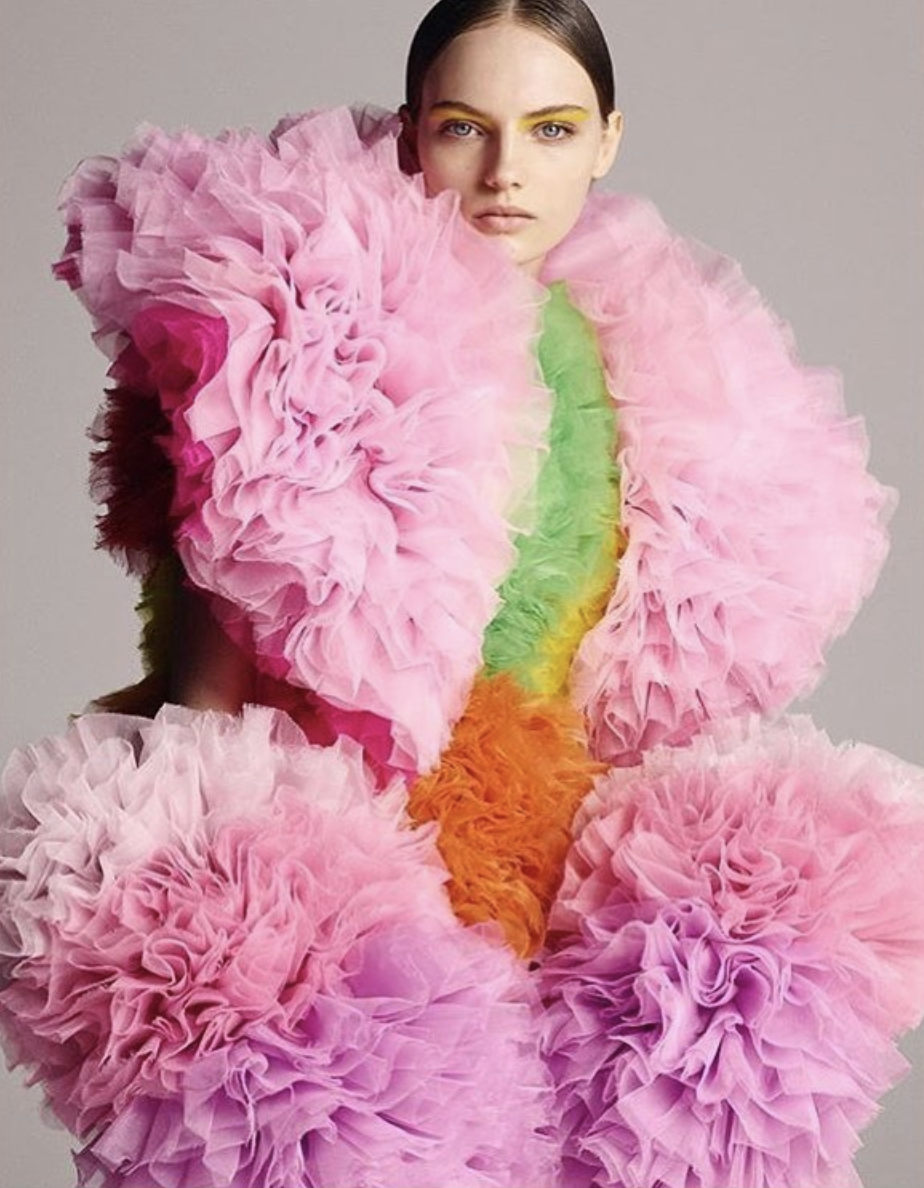 As the winner of the 2018 CFDA Fashion Fund prize, Pyer Moss is beginning to make rounds on getting the brand’s name out. But who exactly is Pyer Moss?

Founded in 2013, the brand was created by Brooklyn-based designer Kerby Jean-Raymond. While attending the High School of Fashion Industries in Manhattan, Jean-Raymond became an apprentice for Kay Unger at the age of 14. Jean-Raymond eventually launched his own line, Pyer Moss, which is described as a luxury streetwear brand. Jean-Raymond himself has described it as his own personal “art project,” and aims to use the voice and platform of his iconic brand to speak out against and challenge social issues.

In 2016, Jean-Raymond garnered attention at the Pyer Moss' Spring 2016 Menswear Collection during New York Fashion Week, where his presentation of the new collection focused on police brutality with references to the “Black Lives Matter” movement, showing street art and videos. This political conscious was inspired by the current issues going on as well as Jean-Raymond’s own personal experiences with racism. You may even find the dubbing of Pyer Moss is the world’s most “fearless designer” to be true, as Moss was the one behind the iconic “Even More Names” tee that Colin Kaepernick was spotted wearing, which featured a long list of names of unarmed black men and women who were killed by police.

Pyer Moss has redefined itself as a brand like no other in the fashion industry, as it spreads strong messages of activism and combines fashion and storytelling. You can expect each season to be unparalleled to the next. 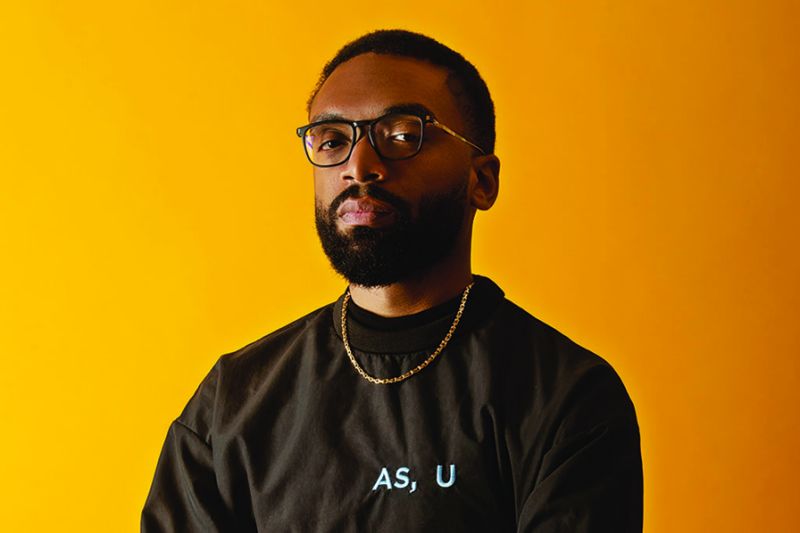 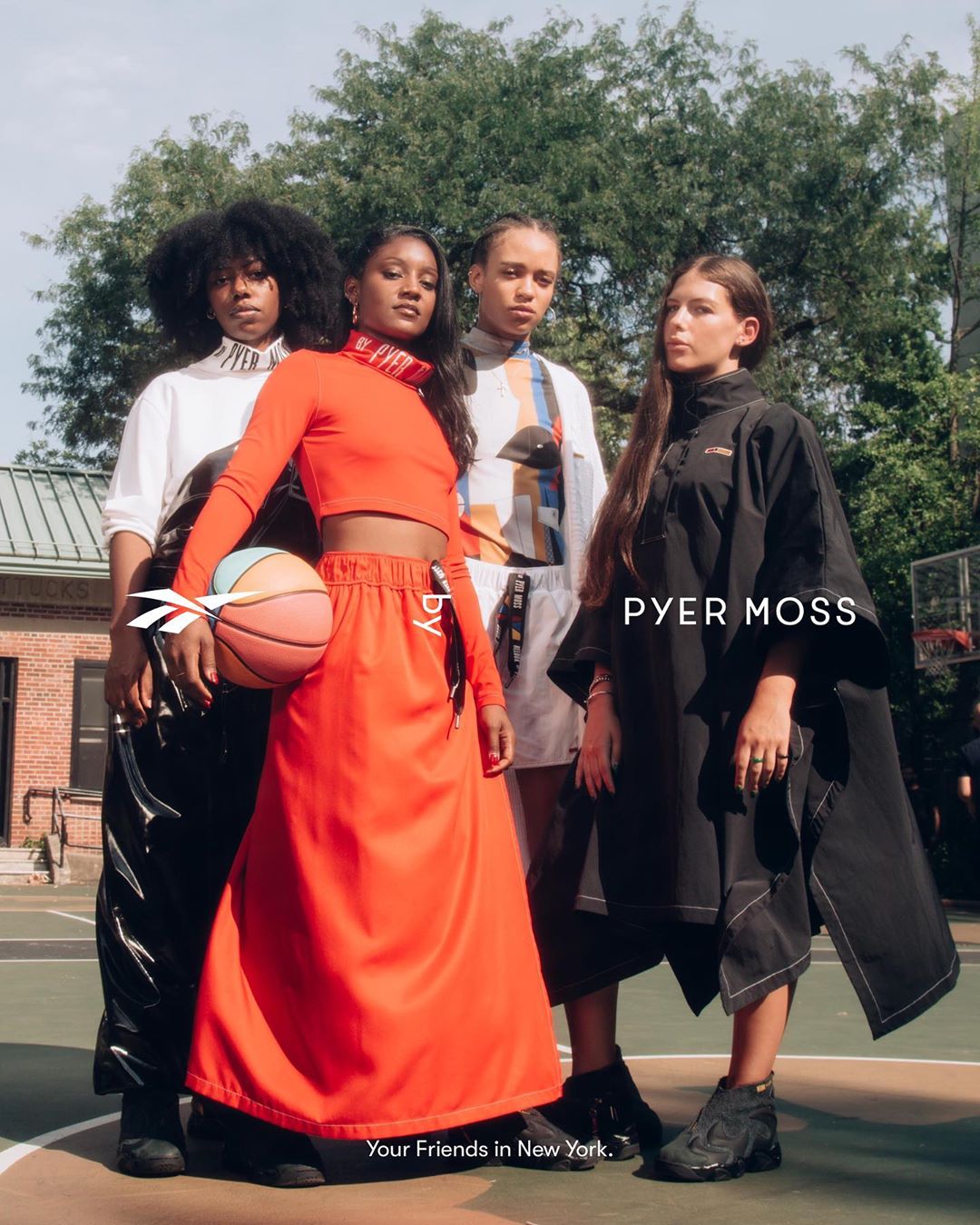 (Photo Via @PyerMoss and Finance Yahoo.)